A lot of folks know next to nothing about the two-hundred-plus-year history of brewing in their hometown. Too bad. This is a fascinating story that should interest everyone, including those who don’t consider themselves connoisseurs of beer.

The below excerpts were originally presented as part of William J. Vollmar’s Introduction to St. Louis Brews, Second Edition: The History of Brewing in the Gateway City by Henry Herbst, Don Roussin, Kevin Kious, and Stefene Russel and were reprinted with permission.

Over its long history St. Louis has exhibited a variety of personas including frontier outpost, fur trading center, raucous river town, gateway to the West, transportation hub, and, not least, brewing mecca. From 1809 when John Coons set up a primitive brewery on what is today the site of the Gateway Arch to Carlos Brito’s audacious takeover of Anheuser-Busch, St. Louis has been known as a city where beer was king.

In technocentric modern America where what is found on the Internet or heard on Larry King Live is often held to be the fount of all knowledge, many might think that beer and St. Louis means Anheuser-Busch and the Budweiser Clydesdales. That would be as far from the truth as possible. While the influence of Anheuser-Busch is critical to the history of brewing in St. Louis, there is so much more to the story than that. Over one hundred breweries have existed in and around the Mound City during the past two centuries. Many were small, obscure operations that lasted but a few years while others grew to be national and international behemoths. All contributed to the American brewing industry and to the rich, vibrant history of beer in St. Louis. 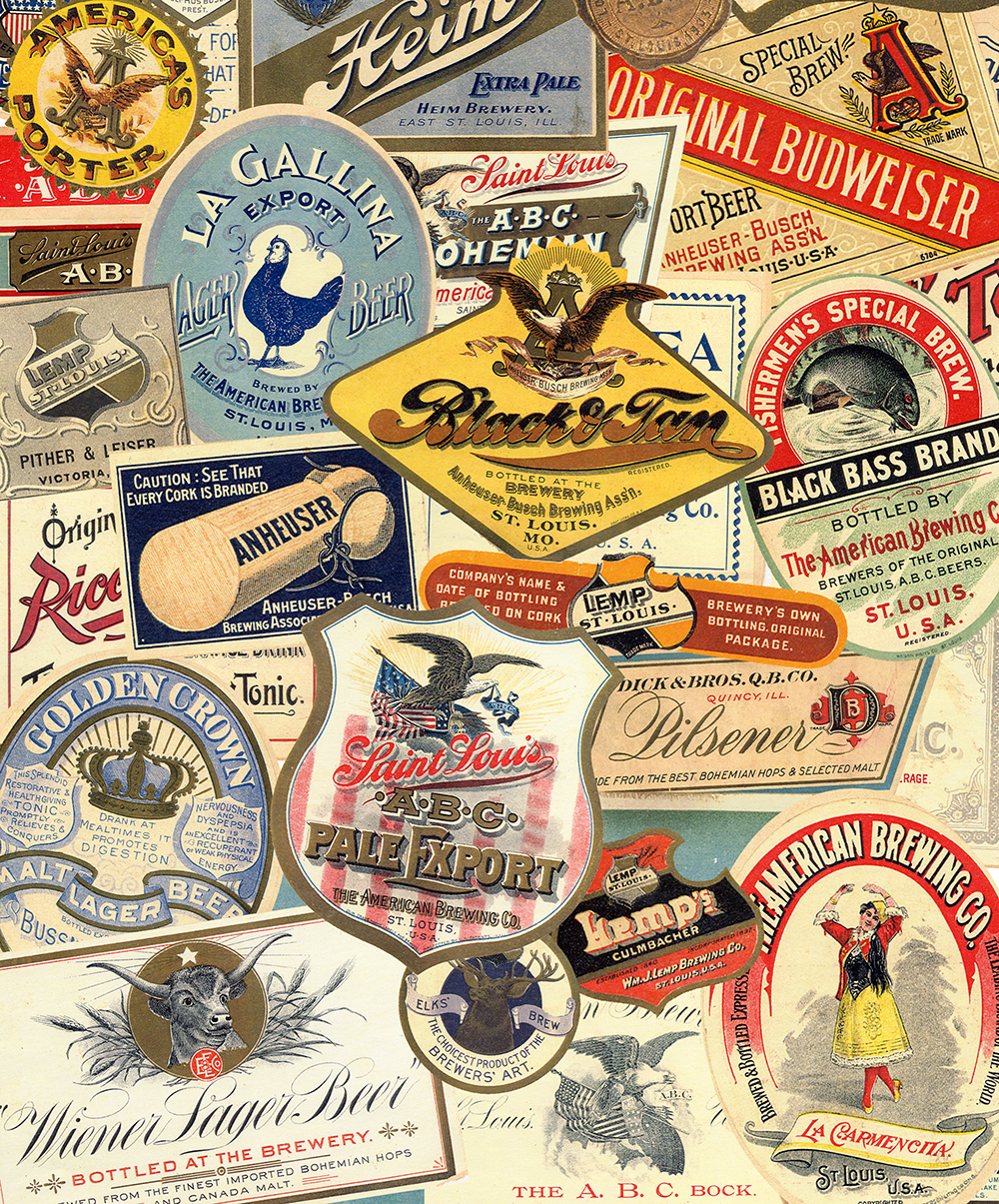 Like most American cities, the origins of brewing in St. Louis were humble: a few small, two- or three-person operations producing only a few dozen or so barrels each year to be sold in local taverns and saloons. It was not until the influx of German immigrants in the 1840s that brewing became a significant business. Among those newcomers was Adam Lemp, who introduced lager beer to St. Louis and, some contend, to the United States. Eventually his Western Brewery would become one of the largest in the country. By 1860 there were forty breweries in St. Louis producing 200,000 barrels annually. Among the smaller of these was the Bavarian Brewery owned by a local soap merchant named Eberhard Anheuser. In 1869 Anheuser’s son-in-law, Adolphus Busch, became his partner, forming the name that would become synonymous with beer–Anheuser-Busch. 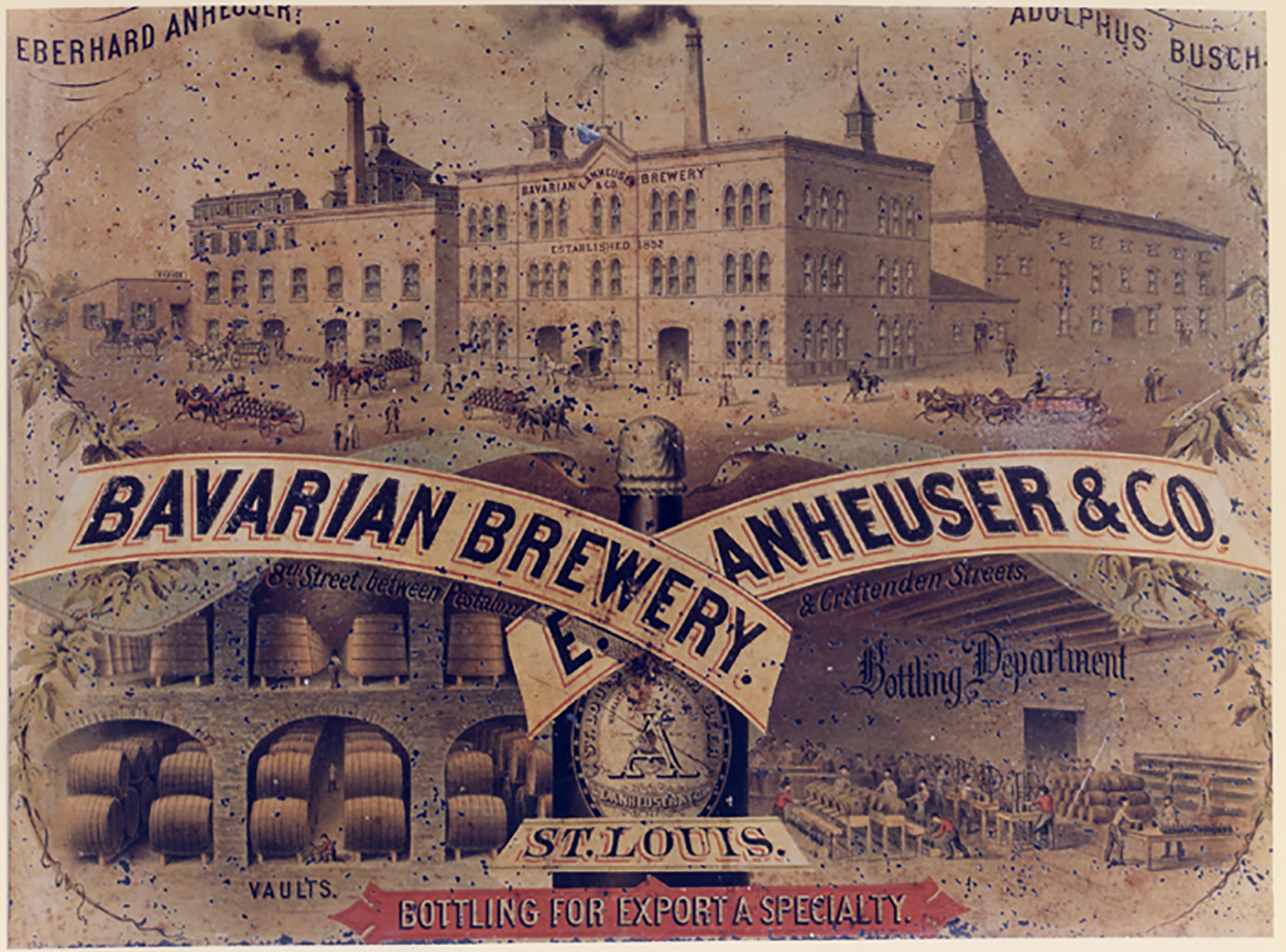 The twenty-five years following the Civil War saw a tremendous expansion of brewing in St. Louis with the city becoming the third-largest producer of beer in the country. As the Industrial Revolution took hold in America in the late 1800s, the brewing industry experienced rapid growth through such technological innovations as pasteurization, artificial refrigeration, refrigerated railcars, and a coordinated system of railroad distribution. These innovations permitted breweries that were local or at best regional in scope to transform themselves into national marketers. St. Louis breweries, led by Anheuser-Busch, were at the forefront of this transformation.

The years between 1890 and 1910 were the golden era of brewing in the United States and in St. Louis. Anheuser-Busch became the world’s largest brewer. Lemp and the American Brewing Company were national brewers. The St. Louis Brewing Association, a combine of eighteen metro breweries, was in full operation and many small local breweries thrived in a city whose population had reached 687,000. But even as St. Louis brewers enjoyed their greatest prosperity, disaster was about to strike them. Within a decade, America’s favorite beverage was declared illegal and all brewing activity in St. Louis ceased. National Prohibition existed for thirteen years. Most local brewers kept operating by producing soft drinks, baker’s yeast, ice, near beer, table syrup, and similar products. 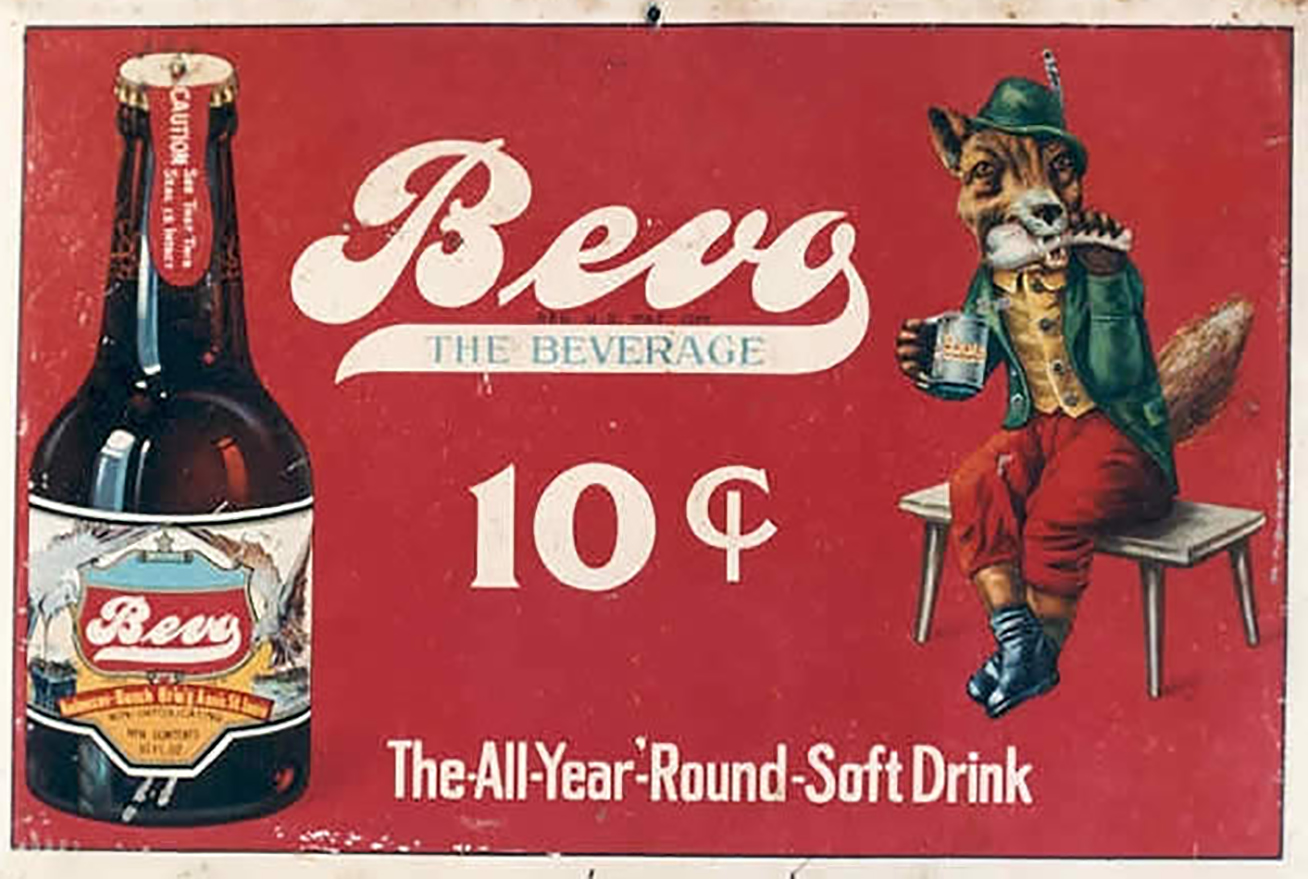 On April 7, 1933, beer was re-legalized. Where twenty breweries had operated in St. Louis in 1919, only eight reopened in 1933. Anheuser-Busch, Falstaff, and ABC were among the national brewers to return. The city’s greatest loss to Prohibition was its oldest lager brewer–the William J. Lemp Brewing Company, which closed its doors and never reopened, eventually selling its property for eight cents on the dollar.

Beer was back but post-Prohibition brewing was nothing like it had been in its golden era. Large national brewers were beginning to dominate in a country that was ever shrinking due to radio, television, air travel, and the automobile. The small local and regional brewer, geared to deal with only his immediate market, was doomed. In 1935 America had 700 breweries; by 1950 there were less than 400; by 1970 only 125; and in 1980 a scant forty breweries produced 181 million barrels of beer. Modern business and marketing practices, combined with changing demographics, meant that only brewers who could produce and market on a massive scale could hope to prosper in a new national marketplace. 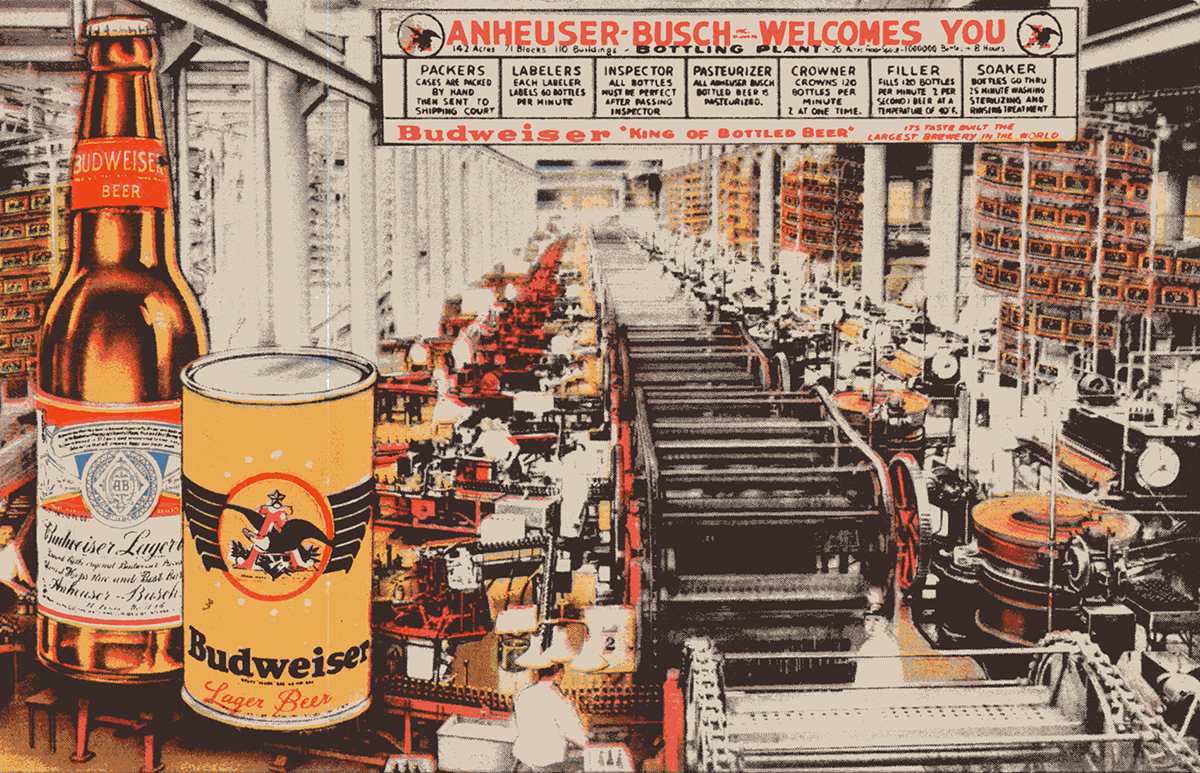 St. Louis mirrored the nation. A city that had known over one hundred breweries in its history reached a post-Prohibition high of eleven and by the mid-1950s had only two functioning plants–Anheuser-Busch and Falstaff. Both were strong national brewers, ranking third and fourth in 1948. Where Anheuser-Busch anchored its national structure on newly constructed, strategically located regional plants, Falstaff sought to fashion its power base by buying and refitting regional breweries that were going out of business. While both companies continued to grow, ranking first and third nationally in 1958, Falstaff’s base proved to be unsound. Its older facilities required major financial support and ultimately the company began to decline in both sales and profits. In 1975, Falstaff sold out to the General Brewing Company of Corte Madera, California. On November 4, 1977, General Brewing closed the old Falstaff plant on Gravios Avenue, leaving Anheuser-Busch as the only brewery operating in St. Louis.

Beginning in 1991 with the opening of Tom Schlafly’s St. Louis Brewery, the city’s brewing industry began to come full circle. Over the next two decades a variety of craft breweries, brauhauses, and brewpubs opened, generally connected with an eating facility and the sale of their beer on-site. This was the full cycle–an intimate local brewery content with a smaller clientele who could be served their beer on-site, fresh and cold as it had been during brewing’s golden era. While we will not see the names of Gast, Excelsior, Hyde Park, or Green Tree again, their tradition is being carried on by Schlafly, Urban Chestnut, Civil Life, Perennial, Modern Brewery, 4 Hands, Earthbound Brewing, and dozens of others, and that can be nothing but good for St. Louis beer drinkers. 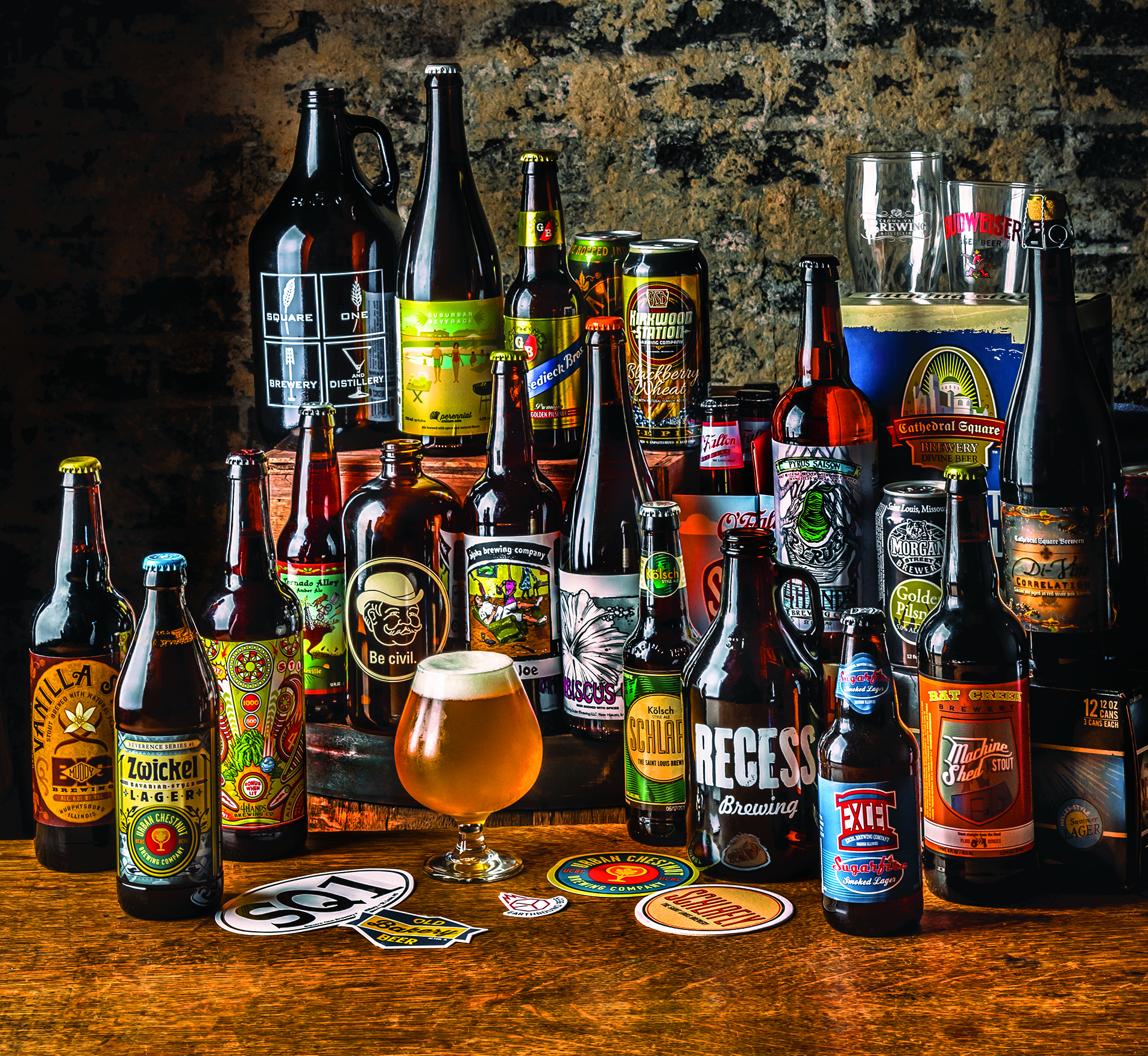 The Book of STL Beer History

Few cities can tell the story of beer in America like St. Louis can. In this third edition of St. Louis Brews: The History of Brewing in the Gateway City, St. Louis’s brewing history is brought to life. Accompanied by hundreds of historical images and canvassing more than 200 years of brewing history, St. Louis Brews journeys through lagering caves, malt houses, and beer gardens alongside legendary brewers named Lemp, Anheuser, Busch, Griesedieck, and many others. The book details how St. Louis has shaped the brewing industry and how brewing shaped the city in return. Finally, as America embraces a new craft beer movement, St. Louis Brews introduces readers to the brewers that will take brewing into the future. Updated with maps, additional images, and plenty of new St. Louis breweries, the third edition of St. Louis Brews provides an in-depth look into the story of beer in St. Louis.